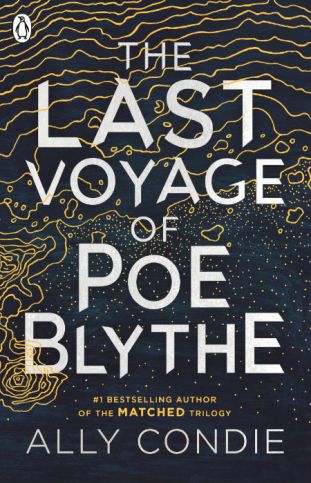 I loved The Last Voyage of Poe Blythe. Even though it’s about gold mining by boat, this is a story about the human race’s future and not their past.
Poe and Call are out on the deck during the evening while there mining ship travels down river. Call is Poe’s best friend and soul mate but his life is cut short when he is killed by raiders, savages that left their civilized town to strike out on their own. Poe channels her revenge into building armor and weapons or the boat; she will find a way to kill every last raider. Usually, Poe stays behind on these voyages but her captain has something different in mind on the next outing: they will collect the gold and she will go with the ship to insure that it comes to no harm. Poe finds herself conflictingly on the water once again. Will she be able to make it up to Call? What kind of leader will she be? And who is spying on her?
Alley Condie always takes you deep into her world and immerses you in the story. By blending past events and give them a future glaze, Condie has created a new world that isn’t just a mimic of other dystopian fiction. Placing them in a river environment gave our characters new challenges instead of rehashing old clichés.
I loved the character of Poe. Poe is not your typical captain of this genre. She is not arrogant or uppity. While she fights to be a strong captain, she has doubts. She second guesses herself and others. It is this inner dialogue that makes you like Poe. There is more than just revenge here; she also wants to be a good captain to her crew.
My only criticism is the ending. It is the same one from Matched and Atlantis: you never see them put their world back together. These stories are how they get away from the danger and the damage. But never do we get to see the world these characters create.
Overall, I loved the book and would encourage everyone to read it.

I received an ARC from the publisher; all opinions are my own