n a world where sequels and prequels run rampant, it was as no surprise that Disney would bring back the Star Wars franchise. What was uncertain was the quality of the films would be produced. The Disney brand almost certainly lends to a viable sequel but fans were left with a taste in their mouth after the mediocre prequels from years before. Add J.J. Abrams (someone with good idea but usually ruins them when he executes them) and the trepidation for The Force Awakens was mighty.
While I understand not spoiling the story, I really don’t like not knowing what the story is about and the movie handles that in the first two minutes. Basically Luke has disappeared after a tragedy involving training new Jedi. Han and Leia have drifted apart; Han has gone back so a life of smuggling but Leia is still looking for her brother. Meanwhile, a new crop of heroes join in the pursuit of Luke: Rey, an orphan abandoned on Jakku, Finn a Storm Trooper who defects, and Poe Leia’s best fighter pilot who is instrumental in battle against The First Order. I’ll keep these spoiler free (I’ll save those till the very end past the photos).
The movie pays homage to the original three films. But this becomes one of the few drawbacks. The first fifteen minutes are pretty much recap of things that have been done in the originals. This quickly gets boring but doesn’t last very long. The movie quickly begins to stand on it own while blending past characters with future characters seamlessly. But you can create checklist of things from the originals and play a drinking game with it. A cantina? Take a drink. A villain with a screwy voice? Chug! The only issue is that the end but I won’t discusses it until after the cut.
With a strong story, The Force Awakens looks great. CGI and technology have come along way but it still visually feels like Star Wars. The characters are developed as the movie progresses with out falling back on stereotypes. Abram does not screw this up. This was a fear I had after Star Trek but here he doesn’t stray away from the things original fans loved but made it accessible to a new generation. Luckily, he doesn’t have to back up his work in the sequels; this won’t be like Alias, where after the second season everything went down hill. I thank Disney for this, for there dedication of not ruining the legacy.
If you’ve seen it, then we have SO much to discuss. Skip down to below the pictures and we’ll kick some ideas around. If you haven’t seen the film, move along there is nothing to see here.

HERE BE SPOILERS
Let’s talk that ending. While it was imperative to see Luke, condemning her travel to him into a five minute time span stinks of the issues that plaque the prequels. Plus, Luke never says anything to Rey when she finds him. This is the moment where he should have announced who her parents were. But nothing was learned or benefited by this exchange. The film could have easily ended with her getting the Millennium Falcon and taking off and then cut to Luke watching and waiting for her arrival. While this is a small issue, it could mean that the pacing for the next film will be ruined.
Parentage is a big issue. With Luke being the last Jedi, we knew that Kylo Ren and Rey had to be related to someone. They came right out about Ren to move the story with Han along. But the writers fed you bits and pieces as they went and overly hinted at her being Luke’s daughter. But could this be a red herring? I certainly think so. I believe that she will be another child of Han and Leia’s. Since twins run in the family and the fear of the force going to the Dark Side, it’s not a stretch to think that they separated her from her brother to keep her safe. What proof do we have in the film? There are two notable moments: the first being when Ren take off his helmet and the two share a charged moment. It wasn’t sexually and was more than just the force clashing between them; it was loaded with recognition and importance. Plus, they looked a lot alike. Next, you have Han’s paternal feelings for her. This is odd in the loner and its possible that he doesn’t know that she is that second child. This also repeats themes from the first films which The Force Awakens has done since the opening minutes.
And finally, I should address Han himself. Many people had no idea that he was going to die and have intimated that I had been spoiler spelunking before I went on opening night. This is outright insulting. In fact, I knew because Ford has been talking about it for YEARS. Just by reading interviews with him, I have known his desire for Han’s death and that it would happen this film. ( While, I don’t make fun of people who didn’t figure it would happened, I was pissed that people would throw hate my way.) But I knew this info before I knew that Han would be such a pivotal role in this movie. Han has arguably been the character that was the moving force in the franchise (the only other character we could argue would be the Darth man himself), and he continues to be so in the Force Awakens. I don’t say this to belittle the other characters. But it will affect the upcoming films. We now know that all the characters would show up in the next film (Star Wars often overcomes death, so this won’t be an issue), but what will the films be like without him as a driving force?
I look forward to the next film and am very annoyed that it will be so long before we get the next installment. But that does give us plenty of time to develop our fan theories.

Oblivion’s biggest issue is that it takes material from every sci-fi/fantasy story ever told and does it poorly. Read on for a list of what happens in the movie and what did it better.*

1. Redhead gets pissed off and causes destruction-Carrie 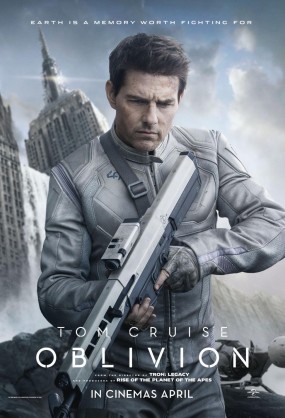 2. Man is confused about what memories are real and which one aren’t- Total Recall
3. Too long and steals from other source material -Avatar
4. Heroes dies but female gives birth to the hero’s baby-Terminator, Pirates of The Caribbean, Premonition
5. Promises a treat when mission is completed but it’s a lie-Portal
6. Tom Cruise plays a man of the future that has been lied to by the accepted normality and then they try to kill him when he rebels-Minority Report
7. Nikolaj Coster-Waldau is a good looking asshole-Game of Thrones
8. Computer tried to kill everyone-2001 A Space Odyssey
9. Heroes must battle clone of themselves-Resident Evil
10. A phrase is repeated and can manipulation people’s destruction -BioShock
11. People stored in goopy cells in an alien ship-The X-Files
12. Tatters of the Statue of Liberty in a waste land- Planet of the Apes
13. Morgan Freeman adds a coolness factor to a Tom Cruise Movie –War of the Worlds
14. Circular robots get ill with the human and try to kill them- Portal 2
15. Collects crappy human relics- The Little Mermaid
16. Hero falls in love with the clone of their true love- Aeon Flux
17. Spaceship chase through tight canyons- Star Wars
18. Movie is so slow that you miss nothing when you go to the bathroom- Twilight
19. Hero redeems himself for the human apocalypse by sacrificing his life- Dollhouse
20. Title- Elder Scrolls Oblivion

*This is not a comprehensive list. The movie was so boring I probably missed a bunch.