Hollywood is obsessed with repeating itself. Chris Pine helped kick off a new reboot? Let’s put him in another one! Let’s take a franchise ruined by Ben Affleck and hope that Pine can do his magic again. This results in a very mediocre espionage movie.
Jack Ryan. That name should be familiar with to most. He is the star of a string of novels by Tom Clancy many which have been made into movie. Jack Ryan come to the big screen in Alec Baldwin’s shoes, but hit his peak with Harrison Ford. Then in 2002 Affleck stared in a reboot that removed itself from the chronological events in the first movies. This movie failed to bring Jack Ryan back. 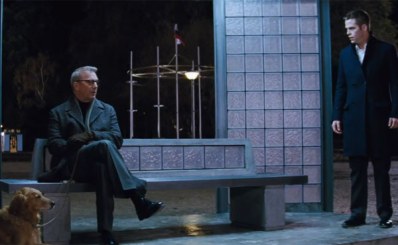 Pine’s version in Jack Ryan: Shadow Recruit brings Ryan into our generation. He joined the military after 9-11 and was injured in a helicopter crash in Afghanistan which ended his military career. Ryan is brought into the CIA by Thomas Harper, played by Kevin Costner who is viscously trying to reboot his career. Ryan starts off in office work, tracing accounting and national security threats with in big money. When he stumbles across a grand scheme involving Russia, Ryan must go out to the field and see if he still has what it takes.
This whole movie is confusing. I am curious as why Russia was once again chosen as the villains in this piece when they are updating Ryan’s story. Russia figures prominently in earlier works especially during those during the Cold War. Are they just going from this or trying to make us see that Russia is still a valid threat while we are concerned with the Middle East and North Korea? Or is it simply, just an un-thought-out plot idea?
Then of course is the actual threat to the American government that only someone with a PhD in economics can understand and decode. When Harper says dumb it down, the script should have dumbed it down. Somehow, Russia is selling off American money and coordinating a terrorist attack so the American dollars sinks so low the Great Depression will look like drop in the bucket. Not that I understood any of that, but I nodded my head and went with it. There are various other things along the line, but let’s look at other aspects of the movie.

Ryan fiancée Cathy Muller is played by Keira Knightley with a horrible American accent. Once again, Knightly plays a rather bitchy female with no empowerment that seems to have become her staple character. Not all of the horribleness of this character is her fault though; she is written horribly and in a very ant-feminist way. She thinks Ryan is cheating on her throughout the movie though he is begging her to marry him so he could confide everything to her. Cathy is moody, week, and unrealistic.
Pine does attribute something positive to the movie. Ryan is given some very complex emotions. While these do not last long, Pine actually makes the audience feel how upset Ryan is with having to kill someone. His Ryan is not all swaggers. This is probably his best role to date.
Jack Ryan: Shadow Recruit leaves a lot to be desired. Kenneth Branagh dos double duty playing the villain and directing the film. I think it may have gone better, if he had chosen one role. But I do have to admit Jack Ryan looks really good up on that IMAX screen.