In the final installment of Telltale Games The Walking Dead, Lee’s story comes to a close and Clemtine’s is open to possibilities. The game play is the same. Point, click a button. Very little timing or precision is required. The game, like the other installments, relies on the narrative to propel it forward, but that is slow going. Players start in the “hospital” looking for Clementine and her kidnapper.

Lee’s tale ends with repetition of previous Walking Dead Storylines. This coupled by the fact that your decisions don’t change the plot, make this the least satisfying episode in the series.  In the opening, Lee is affected by his zombie bite and the party wants to remove your arm to save you. What you choose does not affect the events that transpire or how long you live. Who is in your party and whose resolutions depend on past actions but you don’t change Lee’s much. In fact, TWD fans have been presented with the limb chopping idea in every facet of the series whether it is the comic book or TV show.  Once again, fans are presenting the zombie guts theory but by now the gruesomeness has worn off.

In fact, the episode is rather boring. The scares are few and far between. The resolution of Clem’s kidnapper is in left field, and their isn’t a lot of action at all. The best part is when Lee’s storms the hotel and dealing with Lee’s demise. Gamers, who have played previous installments, know how this one ends but there is a wide open facet that is unsatisfying as a conclusion. This open ending suggests what Season 2 will tackle, but that is not certain. After all the time and energy on protecting Clem, you are not rewarded with much.

Sad and poignant at moments, this installment is the slowest and weakest entry in the series. Let’s hope that Season 2 will play more like earlier episodes. 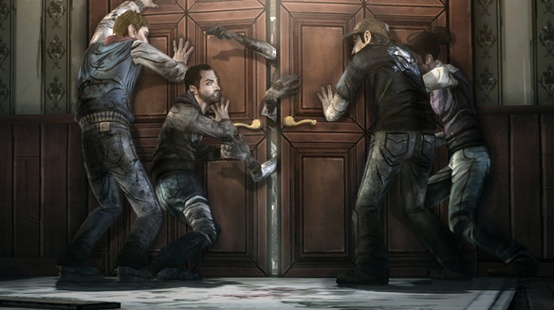