When the explosive first episode of Season 5 aired, fans were shocked as Tig watched his daughter being set on fire. This episode set the bar for SOA to be more brutal not allowing Jax an easy transition.

After that fateful bon fire, things got murkier for the club. Damien Pope was not done taking vengeance on SAMCRO. Jax and Chibs are arrested for a Niner started assault on the Sons, and Tig is brought in for murdering Pope’s daughter. In an effort to stay close to Jax, Opie assaults Sheriff Roosevelt, and goes to county with them.

Meanwhile, Tara and Gemma are trying to figure things out. Tara and Jax planned a secret wedding ceremony without

Gemma’s knowledge. This only strained an already tense relationship between the two women. Tara is trying to shut Gemma out of Thomas and Abel’s lives. This causes some go between with Wendy, the now sober and desperate to know her son biological mother of Abel. Wendy learns quickly she is a pawn and pulls out but not without making it clear that she wants to know her son no matter what.

Gemma and Tara both have taken to drugs to calm their stress. But Tara hasn’t hooked up with a call girl pimp whose crazy half-sister decides to kill herself in front of them. In a scene reminiscent of Nip/Tuck his sister forces Nero and Gemma into bed and to commit sexual acts at gun point. When they refuse, she puts the gun top her head and pulls the trigger.

But there isn’t lost love between the sister and Gemma. Nero’s sister had already sold out the club almost getting Jax killed. In a very Gemma like move, Tara knocks the her around for threatening her family.

Tara’s family is not the only one in danger. It seems there has been a rash of home invasions culminating in Roosevelt’s pregnant wife being shot and killed. While viewers may have guessed the three new SAMCRO bikers are behind it, they don’t see coming is that Clay is in charge. The new recruits are loyal to him a well as Juice who thinks Clay is still incapacitated. It seems, though he lost Tig, Clay has other minions.

Tig and Jax learn where their loyalties lie in prison. Pope wants a son dead, though he doesn’t want it to be Tig; Jax has to choose between himself, Chibs and Opie. Pope also wants in on the drug deals. Jax is torn apart by the idea that he has to choose. Tig offers himself up for sacrifice, but is turned down. Jax tells him for his life, Tig must exchange his loyalty to Jax and to never ever vote against him. Ultimately it is Opie who gives himself up as a token, and is brutally beaten to death.

Jax and company do not leave this vendetta unclaimed. Once out of prison, the three and Bobby head to the warden’s house who arranged for Opie’s death. Tig mercilessly kills the man’s wife when she walks in, and Jax beats him to death with a snow globe evening the score.

Jax also has other ideas for club business. He votes in the Pope drug deal as well as running coke for Pope as well. This will make the club a pretty penny but lines break down the center as some are loyal to Jax and some loyal to Clay. Jax is also taking a new stand on CharmingHeights, helping Hale blackmail members of the community to make sure the deal that the club squashed earlier comes into play. Jax is proving that he has totally different ideas than Clay.

Tonight’s episode will hopefully answer a few questions as well as give clear paths to both Clay and Jax’s visions. Will Gemma be able to keep herself from Nero? Will Tara’s transition as a powerful old lady cause her to falter more? What’s going to happen with the CIA investigation? Viewers can be sure that Kurt Sutter will amaze and blow the mind of viewers every where when answering these questions.

When last season of Sons of Anarchy ended, Clay had been dethroned and Jax was sitting at the head of the table. The club said goodbye to Piney, Kozik and Miles leaving the club a few members short. Clay was outed for killing both Piney and John Teller leading to a brutal attack in his life by Opie. Trying to keep things a secret, Jax and Clay blamed a rival gang for the attack, and Tig promptly repays in kind. But instead of killing the leader of the group, Tig accidentally kills the man’s daughter. This leaves Jax with a very tension situation to try to diffuse.

On The Road Again 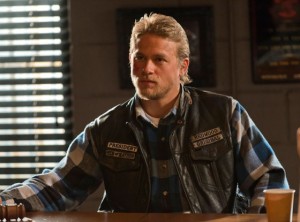 The episode opens with the crew making a run with an unexpected attack by a rival gang. This as well as a rash of home invasions is the local Niners trying to tell SOA they don’t approve of the death of the daughter of Damon Pope. Jax has more to deal with than just the Niners as the sheriff threatens the club and relations between Tara and Gemma become even more tense. Both of the ladies are on hard times imbibing in drugs, alcohol, and, for Gemma, black out sex with pimps. Opie has stepped back from the club letting the newly released Bobby to step up as VP. The majority of the first hour of the show is used to set up the season.

The King Becomes the Old Fool

Appropriately entitled “Sovereign,” the viewer sees what happens to the old king once the new one has taken his place. Even though Piney is gone, it seems there is a new fool to take his place. Fragile Clay is trying to deal with his diminished state and in a sad scene fails to hold up his bike. Clay is shrunken, slumped, and low voiced. When he comes to the table, plops his oxygen tank on the table and sits in Piney’s old seat, we’re left to wonder, is he going to loose it in alcohol?  He has lost his wife who, after a brutal beating and learning that he tried to have her daughter in law killed, can’t stand to look at him. His state proves he is only weaker without Gemma.

Clay makes the one power play he has left: confesses to Piney’s murder. When I say confessed, I mean the only truth was that he pulled the trigger. This sad tale of self defense he spun does three things: takes away any blackmail threat surrounding the murder, makes the guys feel sorry for him and therefore loyal, and screws with Jax’s head.

But Clay hasn’t just lost his position in the club and his wife; he’s also lost his best friend. When Tig finds out he killed an innocent girl, Tig starts to truly second guess his relationship with Clay. The split that has been building up from last season is c0ming to a head.

Getting Tiggy With It

ith the consequences of his actions. In fact, Tig is a running theme in the episode. At the beginning, he is friendly with Jax and there seems to be no animosity between him and Jax. Even the club as a whole doesn’t seem overly angry with him for killing Pope’s daughter. He goes from accepted to humiliated as Clay reveals his lie. Not only is Tig dealing with the fact he killed an innocent girl, but now he knows his best friend lied to him. He and Clay have a frank discussing that leaves the future of their friendship in peril.

Things really heat up when Tig gets a phone call from a detective saying that have his daughter Dawn in custody. Tig has to pick her up so she will not be charged. Instead of finding his daughter, he finds Pope’s men and a detective ready to escort him to jail. But when he is handcuffed, he is not taken in a squad care but chained next to a dumpster. In the dumpster is Dawn. As Pope’s men cover her with gasoline, Tig begs Pope to kill him instead. It’s heartbreaking to watch this strong man beg for his daughter’s life. And for a moment you think Pope might. But Pope’s henchman dowses her in flames, and Tig can only call to his daughter as she is burned alive. Pope then leaves him to mourn. Tig manages to get loose enough to kill the two men Pope left behind. Only once this is done does Tig let the rage dissolve into grief. 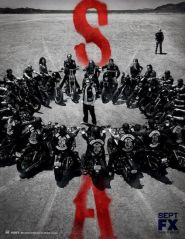 With the death of Tig’s daughter, viewers know there can be no truce with Pope. The club will have to balance this war while three of their members are on the lamb. It seems that Jax, and Chibs have been fingered for the truck explosion, and the law is out for Tig’s involvement in the Pope murder. Jax will have to manage a club that has no idea where its loyalties lie as each member tries to understand the events that transpire. Things will become increasingly difficult as Abel’s mom returns (so looking forward to that), and Romeo puts pressure on Jax from the CIA deal.

With this as the premier, things can only get more mind blowing and violent as Kurt Sutter takes us into the farthest reaching of his mind. Who will make it out alive?