The first portion of this review contains no spoilers. The second portion under the pictures contains spoilers in order to review the movie as a conclusion to the series.

A better movie than the first, a different beat from the second, The Dark Knight Rises is an action packed thrill ride. This fantastic blend of insane comic like violence and fabulous special effects wraps up Christopher Nolan’s reboot of the Bruce Wayne tale.

This go around, Bruce Wayne is a recluse with a questionable limp wallowing in self pity. As the city of Gotham celebrates the eight year anniversary of Harvey Dent Day and peace from organized crime, a master thief sneaks into Wayne manner unknowingly setting forth a terrorist attack on the city. Enter Bane, a largely muscled, masked villain who takes control of the money trading operations in the city. This leads to the fall of Bruce Wayne, Commissioner Gordon being shot, and, ultimately, the Batman returning. Bane takes control of a bomb that can destroy the city, and he calls up the citizen to rebel against the government. He threatens to blow up the entire city if anyone leaves the island. Selena Kyle and Wayne must partner up to save the city.

At first, the movie seems peppered with plot holes and unanswered questions, but these are leaving room for plot twists that change you perspective on the characters and their motives. The script works hard to make this entry a cohesive package winding the three movies together. The attention left on Harvey Dent gets old, and you wonder if he wasn’t meant to be yet another villain.  In fact, as with every Batman since Tim Burton’s first foray, the films have suffered from too many villains. But this script winds them together rather evenly making their stories mesh.

The movie is at its best when it is showing off the special effects and the well directed stunts. The best of these are Batman’s fight with Bane, a character that Batman can’t use all his gadgets to defeat. These slug fests helps round out Batman’s humanity as Bane pounds into him. Hans Zimmer continues to ramp up the tension with his pounding score. The visual ascetics add to the tone. It’s a brighter Gotham than we’ve seen implying that the city is at peace after Dent.

The majority of acting is top notch. Bale gives a wonderful performance, and his Batman voice has settled some. Speaking of voices, Tom Hardy gambles with a unique voice for Bane and scores. More coherent than many people will lead you to believe, Bane’s voice calls to mind a psychotic Sean Connery using an augmenter. In fact, fans of Hardy should be able to hear the distinct sound of his voice with in his Bane mumble. Anne Hathaway does well as Catwoman but her voice and sexuality are over done. You can tell she is trying hard to be sexy and seductive, whereas many other actresses could have just oozed the sexiness. Her version of Catwoman quickly becomes as normal as Bale’s Batman voice. TV fans will be excited to see Josh Stewart and Desmond Harrington from Criminal Minds and Dexter respectively.

The much anticipated conclusion to Nolan’s Batman trilogy lives up to the hype. Full of twists and complex characters, it’s the superhero movie of the year.

Read on past the photos for the spoiler filled part of the review. 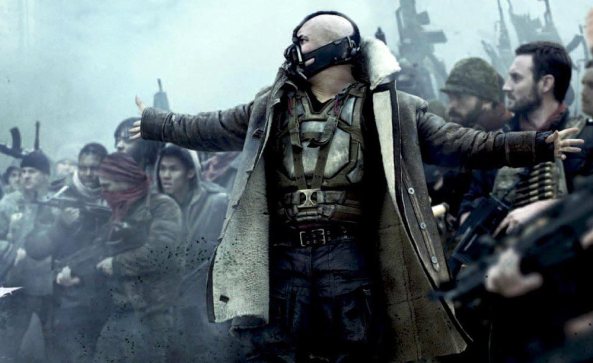 The Dark Knight Rises wraps up the Nolan-directed trilogy excellently. With appearances from Liam Neeson and Cillian Murphy, the villains are woven together in a way that gives a complete picture of the Gotham underworld. It seems odd to say about villains, but it’s like beloved characters coming back from the dead. Originally, when I read that they purposely left out the Joker, I felt it was the right decision. But after watching the film, it seems like he has been forgotten instead of being revered. Especially with Ra’s Al Ghul comes back from the dead and tying all the characters from the film are all linked together.

I was also pleased with the ending. I did see the ultimate ending concerning the legacy of Batman coming after reading Entertainment Weekly. Blake’s fate is beautiful. Not only is it hopeful and rounds out the Batman legacy, it proves that anyone can be a hero. I think this idea resounds more than the political rhetoric of Bane and Tate. What I really loved about the ending was that Batman and Catwoman finally go together. It’s something fans have wanted for a long time. Not only did this ending give Kyle’s character depth, but Wayne can quit whining about women which has always bugged me.

The only thing I was really displeased with was that Alfred left. While I’m not up to speed on all the comics, it still seems out of character. Alfred has always been a father figure that helped keep him safe. Then suddenly he leaves like the best friend that can’t watch a crack addict kill himself. And while there may be parallels, I never thought Alfred would do it.

The movie is probably the best third sequel since Indian Jones and the Last Crusade leaving Nolan’s reboot on a high note.