Big Lies in a Small Town is typical Diane Chamberlain; the kind of typical you always enjoy from her.
Morgan is serving time because of a drunk driving accident that left a young woman injured. But, surprisingly, she finds herself out after serving her minimum sentence. There is a caveat: she is being released to do work on an old mural as part of her parole. The mural is old and nasty, but she must restore it before the gallery opens in just a few short months. Morgan must learn painting restoration while being distracted by the story of the artist Anna Dale who, who according to the townfolk, went crazy and disappeared.
As usual, the author gives readers a story they can take to their hearts. The female 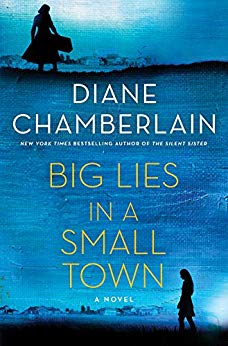 protagonists are quickly accepted and loved, and you just want to see happiness with in their tragedies. Morgan is no exception. Big Lies is a double whammy; you latch onto to Anna Dale as well as Morgan as the book switches between present and past. Your heart is doubly torn apart as both women share center stage.
Chamberlain is queen of emotional twists. While I called one, I did not see the other coming and that delights me. Chamberlain always has at least one present for the reader. A present that moves you and causes you to see the characters in a different light.
There are a few small issues. The townsfolks claim not to know what happened to Anan Dale as if she just disappeared but there is no way the historians of the town missed the articles of the events that caused her disappearance. No one would have just said that was just her going crazy. The second issue is my own. The book ends and I needed to know what happened to Morgan. Chamberlain implies with this ending that it doesn’t matter, but it does to me. I have come to love Morgan and I feel a need to know exactly what happens to her.
Big Lies returns to the more traditional set up of Chamberlain (that’s not to say The Dream Daughter wasn’t amazing; it was, in fact, superb). This novel is women’s fiction at its height looking into the things women face and how we have to deal with them.

Publication Date: January 14, 2020
I received an ARC from the publisher; all opinions are my own.