An Anonymous Girl is a decent addition to the shock drama genre of today. 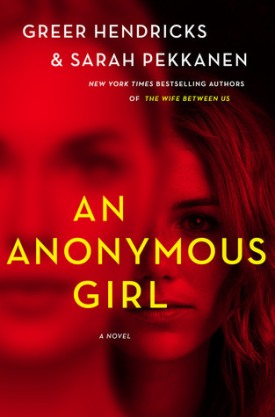 Jess is barely making it in New York working with an online make-up service company. When she hears about a study that takes a short period of time and makes money, she decides to sneak in. There she is presented with ethical questions and asked to bare her soul on a variety of topics. What Jess doesn’t realize as this will lead her into a world of obsession, lies, and murder.

The biggest problem is that this is a shallow comparison to Greer Hendrix and Sarah Pekkanen’s first work The Wife Between Us. That novel was well written and you felt for each narrator and their place in their life struggle. The twist was amazing and you thought about the book a whole different way prompting you to reread the novel.

An Anonymous Girl is the not like that. While it has twists and turns, none of them is Earth shattering. The reader has been waiting for those missing puzzle pieces and then everything easily clicks with little fanfare. While this not a usually an issue (this keeps the book going and enticing), I was expecting something like the first book only to be disappointed.

There are true criticisms of the book. The second narrator is unlikable and in writing a matter of fact and boring way.  I assume this was meant to show she was a character of details, but I didn’t care to read a chapter that she picked out a nightgown. I was tired of her lack of emotional content seeing that she was a person who made that her business. These passages were taciturn with 10 dollar words to make her sound intelligent (uncharacteristically she repeated her words a lot; if I read “engendered” again I was going to scream.). I realize it wasn’t really supposed to like the character but these passages didn’t make me want to read more; it was Jess’ view and story that kept me going.

I was also alarmed about the ongoing craziness. At one point, I wanted to put down the book because really? You are pushing too much. From a girl that becomes obsessed with her psychiatrist to a cheating husband to sister deaths to hidden cameras, I had a hard time suspending reality.

An Anonymous Girl sets up an intriguing premise but never really flesh out its ideas on ethics. I enjoyed the epilogue which the only time the story truly surprised me. But overall this is a typical thriller is a genre where everyone is looking to be surprised and want things to be over the top.

I received an ARC for review; all opinions are my own.