The WordPress.com stats helper monkeys prepared a 2015 annual report for this blog.

A New York City subway train holds 1,200 people. This blog was viewed about 3,700 times in 2015. If it were a NYC subway train, it would take about 3 trips to carry that many people.

Explosions, car chases and gun fights are a plenty as Bond slays an octopus and saves the word. Spectre is a fun ride with a succinct focus that tidily wraps up the Daniel Craig era.
Bond finds a link to an underground organization after a visit to Mexico city where his destruction makes the national news. This is critical mistake for MI6- the 00 Project is threatening to be disband as MI-6 takes over with a new system that watches everyone 24/7. Bond takes no head when, by the help of Q, he sneaks off toff after being grounded by the newest M. But what they don’t know that the previous M left a clue to her death behind. Bond will stop at nothing to avenge her and get to the bottom of Spectre and its intersection in his life. 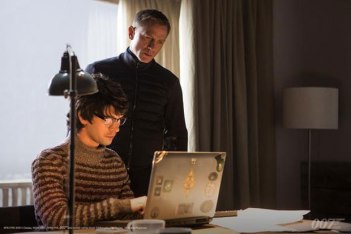 The is what viewers love about bond: foreign beauties, ridiculous stunts, and snappy one liners. But t the iconic lines of James Bond fall from Craig’s mouth like stale bread. It is hard to tell if it is the writing or the acting. Craig’s distaste at ever being Bond again is a good thing. This means we don’t habv to watch him an his route performance. As usual, he shows off his body but does nothing on the acting front. Christopher Waltz is great as the typical over acting villain, and Dave Batista has become this generations Tor Johnson. The true standout performance is Ben Whishaw as Q. He is witty, brave and often the humorous release for the film. Whinshaw is the best casting choice since Dame Judi Dench as M.
The plot is thin and shake which is typical of many of the films and the twist at the end you will have seen coming since early in the film. But it truly doesn’t matter. Bond films are known for the thrilling chase scenes and fights. Add in a shake of humor and the movie continues to entertain.
Happily, writers conclude the stories of the last three films forming a common thread for Craig’s time as Bond. This fourth film ties all of them together. Villains past and present have a story that is wrapped in a nice shine bow connecting some of the weaker movies together. Bond finally comes face to the face to the man he has been truly hunting since Casino Royale ending the latest leg of Bond films.
Walking out of the theater leaves a better taste in Skyfall (even if the theme song doesn’t ,measure up). Viewers and Bond get closure as the franchise looks to the future. Until the studio decides on what is next for fond, Spectre is a nice little meal to tide you over.