Guillermo del Toro’s latest film Crimson Peak has picked up a lot of hype as a horror movie. But what is Chrisom Peak exactly? And how does it stack up to his other works.

Edith was visited by the ghost of her mother as a child and it warned her from Crimson Peak. But that cryptic message becomes less of a concern as she grew into adulthood.  Edith must entertain the advances of her childhood friend Dr. Alana McMichael (Charlie Hunnam) and exotic stranger (Tom Hiddleston) with a bad reputation while being shunned as a female author.  After her father dies, she marries Thomas Sharpe despite his bad reputation. They join his sitter in their decrepitated manor England. Once here, the ghosts come back to warn of betrayal and murder. 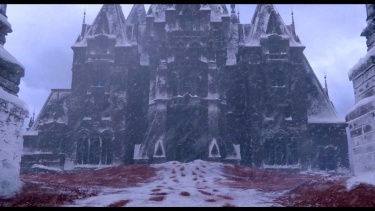 The problem with Crimson Peak is that it’s not scary. I had read that it was supposed to be scary and was highly disappointed. There was some violence and gore but no scares. My friend had to point out that it was more Gothic horror than a traditional horror movie, and I have tried to see it in that light. While it helped my perspective of the story, it did not really help with my enjoyment of the film. Del Toro is a fanboy and all his best work emulates his influences and likes but most add his own touch and makes it his. This is a love song to Gothic horror stories but adds very little new ideas other than some horrific violence.  The movie is basically “The Woman in Black” combined with “The House of Yes.” Taking ideas, atmospheres, and stories from a plethora of sources (Poe, Bronte just to name a few) they are hodgepodged together with little subtlety. The writing treats us like children showing us that they are telling a version of Jane Eyre with Mary Shelley undertones. We have to guess nothing that happens as we know how these stories play out. It reminds you in exposition that it is a romance and it is a story with ghosts in it (seemingly to fight off the mislead advertising for the film). This is insulting to the viewers and lacks the nuance of so many of Del Toro’s past works.

Jessica Chastain steals the movie and too much time is spent on Mia Wasikowska’s naive and inspecting lead character that sees specters. It is Chastain that moves the movie forward, the one that gets to play a smart and fierce woman.  But as her character’s persona denigrates, her performance crescendos. The other actors can’t keep up with her Hiddleston and Hunnam are all passable but not overly inspiring. There characters just seem to be fuel for Chastain’s playground There is only one other character that stands out so some much.

Luckily, like most of this genre, the house becomes a character in itself and all the visuals are stunning. The house looks like other you have seen before but the deterioration and the clay that leaks from the walls and floors like blood are eerily creepy. It is the clay that leads to any kind of f horror turning everything a bloody red. The red snow is insanely creepy and is more than just a metaphor for the horrors taking place inside the house. Alas, not everything is treated with such smart double dimensions.

Unfortunately, adverting by the studio cannot contribute to the issues with the film.  Many reading this will say I am wrong, that it perfectly emulates all the classics. This is also its down fall. We del Toro fans hunger for his next project, to see how he puts himself into things that we love how he brings it into our world. But this movie didn’t do that. So the literature fan in me will subside so the nerd girl within me can start pining for Pacific Rim 2.

Kingsmen: The Secret Service is hands down one of the best movies of the year. Colin Firth leads a top notch cast in this humorous look at the spy world directed by Matthew Vaugh (X-Men: First

Harry sees the potential in Gary “Eggsy” Unwin, an inner city kids whose mom is stuck in the mob life. When Eggy calls in a favor from the Kingsmen, Harry takes Eggsy under his wing and trains him for a spot in the elite service. Eggsy learns fighting skills, espionage techniques, and most importantly, how to be a true gentleman. All of Eggsy’s new acquired skills are put to the test when an eccentric millionaire tries to take over the world.

Kingsman combines humor and action, making it more than just a spy spoof. With subtle mocking of society and our depended on technology, Kingsmen looks at the ways of older generations and blends them with aspects of these latest generation to create a human ideal. Though I make it sound like it, the movie isn’t preachy; its tongue in cheek and full of laughter. Witty and smart, here more than just slap stick and potty humor (yes, there is some of that). At the end of the film, you are pleased to have passed the time with these characters and anxious to watch it again.

This zombie drama starring, Abigail Breslin and Arnold Schwarzenegger, is truly as good as all the hype. Focusing on family and the psychological aspects of the change, Maggie is a suspenseful thriller instead of a gory horror movie.

On a farm in the Midwest, Wade (Schwarzenegger) must deal the fact that his run -way daughter has been bitten by a zombie. Medical science has been studying the phenomenon and has no answers, just quarantine. Maggie, the titular daughter, must deal with a slow transition into a monster. With a father who loves her and a step-mother who is afraid of her, she must deal with more than just family life; she must deal with becoming undead.

Maggie is a realistic look at the zombie apocalypse. No major event happens. No half decaying bodies are running around. Instead, it focuses on how a family deals with disease and the inevitable death of a cherished member. It is a metaphor of an aging world cloaked in zombie trappings. Scaring you more by your mind than by your eyes, Maggie is the most subtle of zombie films. My friend was freaked out by the movie because of how real it was; she said several times “They are showing it as if it can actually happen.”  That scares me more than other zombie movie I’ve ever seen.

The movie focuses less a murder mystery that it does on the state of life in the Soviet Union doting that the 1950’s.  Don’t expect a taunt crime thriller; instead, be prepared for lingering despair,

hope in humanity, and malleable relationships.

Leo becomes a hero in the Russian secret police.  Promoted quickly, he rubs elbows with the higher ups. But when a longtime friend comes to him about the possible murder of his child, he becomes a liability to his superiors. When his wife is set up as a traitor, Leo is demoted but doesn’t give up on finding out who perpetrated the heinous crime.

Child 44 is slow. Little attention is paid to the mur-I mean accidents that happen to these children. Instead we see Leo’s life unfurl,  beginning with his heroism followed by his  inevitable down fall  and setting forth on his noble quest. If you were unaware of how dark Russia was during this time, then you will be surprised about how bad it was for anyone under the regime. Hardy gives an excellent performance (as always) easily portraying the irony that his character suffers from- his ladder to the top is also his downfall. Charge with emotional and driven by character development, Child 44 is not a who-done-it, but a picture of a world that was real not that long ago.

Based on the hands down best book by Gillian Flynn, Dark Places follows real human beings and the dark places inside them.

Libby survived the massacre of her family when she was young. The only family member besides her to make it out alive is her brother who has been convicted of killing her mother and sisters. Libby hasn’t adapted well to post-tragedy life and has coast on a trust fund provided by a public with big hearts. But the donations start drying up and her book isn’t making any money, so she desperately accepts the offer to speak at a local “Murder Club.” The group meets to discuss murder cases, solve the unsolved and fact checking the solved ones. When they suggest her brother Ben is innocent, she can’t emotionally handle it but the promise of money to research what really happened is too good to pass up. Switching between the present and that her family was murdered, Libby and the audience find out what really happened that night.

The movie is better than Gone Girl because the script and story are stronger. Instead of straight up psychos (this does not disclose any psychos in this move), the story centers on real people and the murid of ways our psyche deals with the hurts in our lives. From lies to love to betrayal to sacrifice, the movie runs the gambit of human emotions and what we each see as the injuries in our lives. Backed by powerful performances by Charlize  Theron, Christina Hendricks, and Drea de Matteo, Dark Places is an excellent film.