How The Governor is Bringing The Walking Dead Back to Life

“Live Bait” is by far one of the best episodes in The Walking Dead’s history. Many fans complain because the episode does not contain a Rick/Daryl prison plot. But this episode returns to what made The Walking Dead so good when it began: it focused on drama and character development.

The Walking Dead has had tumultuous existence going through three show runners in four seasons. Sadly none of the following seasons have lived up the status quo set up from Season 1. Season 2 had pace issues. For as slow as the first half of the season was, the second half was just as fast and there was never a middle ground. Season 3 flipped flopped between stories and alienated many members of the cast from each other. As the viewer watches with omnipresence, not all the character knew what was going on. Season 4 attempts to go back to the character development of Season 1, but the writing has been subpar. Season 1 was the best because it focused on the drive and emotions on the people in it. It focused less on the zombies and more n how the zombie apocalypse changed them and those around them.

Season 4 finally found the right path with “Live Bait.” The episode centers on The Governor after his disappearance in Season 3. The plot follows him as he reacts to his own deeds. You’d think The Governor would be laughing and boasting. Instead, he’s a shell; he’s not the man he once was. We see him interact with someone new showing that he could care about people showing a more timid and meek governor that even before he became a villain deranged by grief. The juiciest part? The excitement of finding out if he will succumb to his evil side or if he can truly change?

In fact, it’s very the same kind of tale found in the pilot episode. Lone, bearded man meets a stranger and becomes emotional close to them. He moves on without them, killing poor suffering zombies on his way. Like Rick, this substitute family gives The Governor (now known as Brian) hope.  But unlike Rick, the family sees hope is in this broken man and follows him. The viewers feel that hope as well and ponder if the man can change. The episodes end the same as the pilot with the man facing certain death. Viewers eagerly await what happens next. What worked for Rick clearly works again for The Governor.

More attention to character development and less focus on zombie carnage (don’t worry there is some good, gross stuff) makes “Live Bait” one of the strongest episode by far. The Governor’s arc is setting this Season up as something that creator Frank Darabont would appreciate. 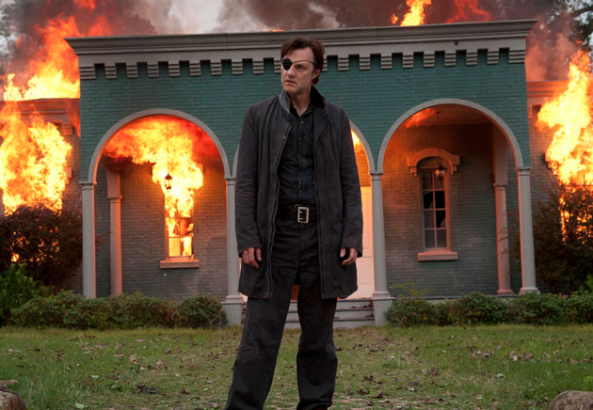